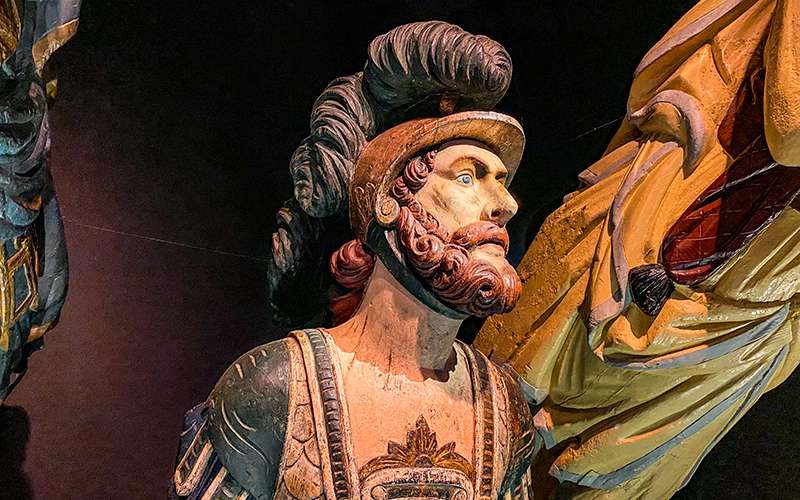 He is like a stern man taking a bow.

Or, more accurately, the bow.

My wandering around the Mystic Seaport Museum has led me into this wonderful display of figureheads.  I had noticed a few in or on other buildings, but here, dramatically lit against a dark background, I can truly appreciate this artistic tradition.

Adding painted or sculpted human accents to ships dates to ancient times.  For some, like the Vikings, they were meant to ward off evil spirits in the elements.  By the time these examples were carved, figureheads were a way to identify either the purpose of the ship or the wealth of the owner. 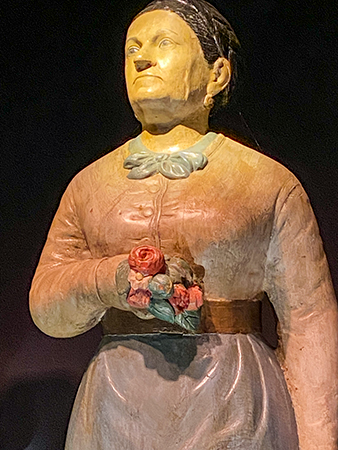 Some of the examples today have been odd.  This one looks like the sailors wanted their mother to watch out for them.  (“Time to wash your nankeen britches, dear.”) 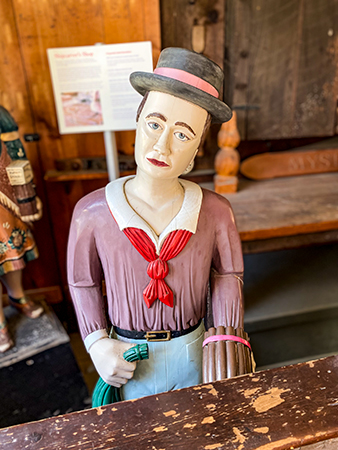 This one, oddly placed behind a counter in a store, seems to be ready to sell both dynamite and the fuse.  (In fact: cigars and tobacco.) 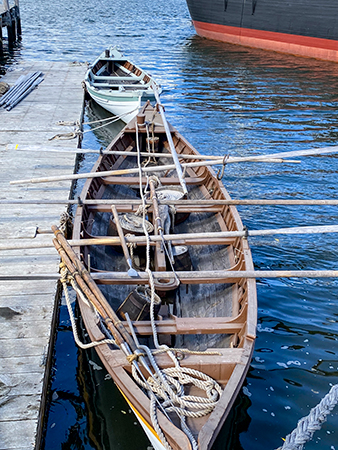 My thoughts keep coming back to Jesus, asleep in a boat while a storm rages.  In Mark 4:35-41, we are told that Jesus sleeps on a cushion while violent waves wash over the boat, already filling it with water.  This boat, of course, had no figurehead but had the very creator of the elements riding within.

In the Old Testament, a storm-tossed sea was a visual of the chaos brought by the spiritual forces arrayed against God.  There was malevolence in it, even to the point of ascribing it to a metaphoric sea monster.

For sailors, ever wary of the thin hull between them and a watery grave, it was easy to see storms as a wild beast out to get them. 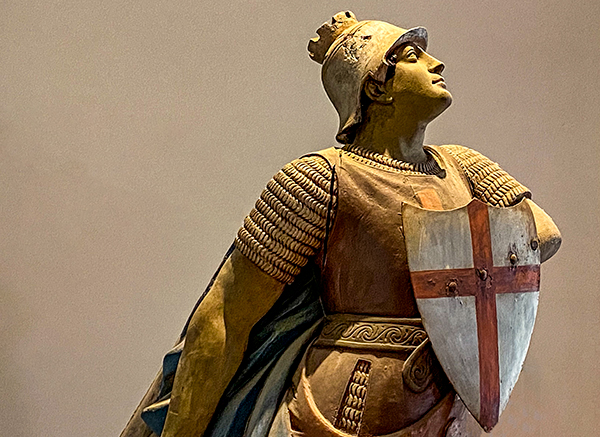 When the disciples wake Jesus, he takes control.

He got up, rebuked the wind and said to the waves, “Quiet! Be still!” Then the wind died down and it was completely calm. (vs. 39)

One commentator offers the more literal translation of those commands as, “Be silent! Be muzzled!”  The wind, in response, Mark writes, grew tired. Seeing this, the disciples are awed and amazed.

Jesus scolded the storm like it was an unruly beast.  Was there demonic intent in that squall?  Does Satan even have influence over the elements?  I don’t know.  But I recognize that Jesus is about to quiet an internal demonic storm in a man on the distant shore (Mark 5).  And when those evil spirits are sent into pigs, they rush back to the sea.

Could this have been a two-part lesson about his Lordship over chaos? 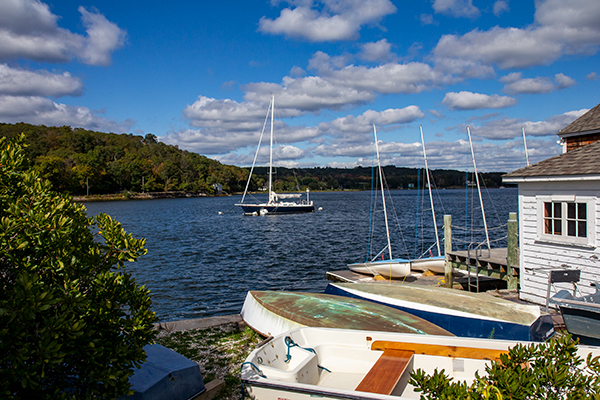 Isn’t it interesting that figurehead also has come to mean a leader without power?  The disciples witnessed two displays of Jesus’s authority to bring peace to pandemonium.  External storms.  Internal storms.  Jesus is sovereign.

On this sunny day, no storms are on the horizon.  But life’s squalls arise seemingly out of nowhere, as they have recently for loved ones.

It’s so good to know that he who can control the chaos rides in the boat with us.

Jesus, speak to the storms in our lives.  They have arisen without warning and threaten to swallow us.  It’s hard not to worry.  Command the wind and waves again, Lord!  And grant us peace while we wait.

Reader:  What’s the worst storm you’ve ever been in?  Did it hold any spiritual lessons for you?

Email me about it at This email address is being protected from spambots. You need JavaScript enabled to view it.. And consider sharing this with friends via the social media buttons above.

The Greatest of These

This Way to the Fear of God