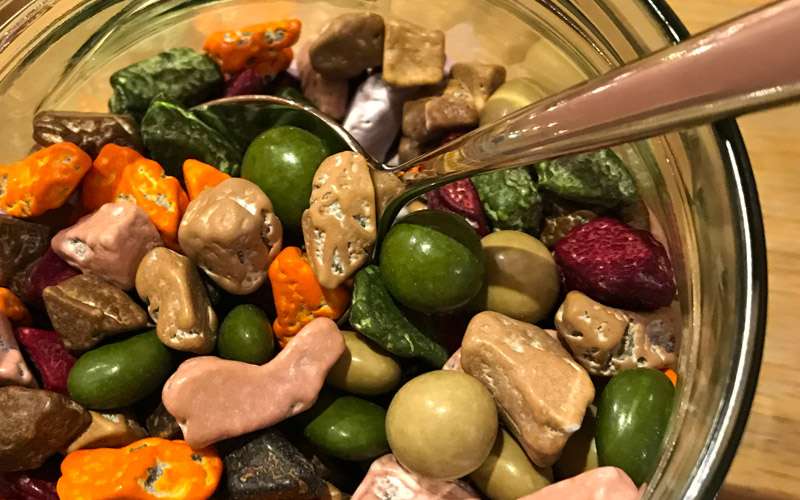 It is afternoon and in a German hotel, where I am working in a corporate session, they have given rocks to snack on. Sorry, I exaggerate: pebbles. In a bowl.

I can hardly believe it. Somewhere in my increasingly gray matter a memory is sparked of candy rocks. They were a one-time wonder of my childhood. And here they are again!

Putting the first one in my mouth, I crunch down and taste sweet chocolate. This makes me scrutinize the pebbles in my hand, trying to reconcile the incongruity of the concept. I suppose it’s a kind of confectioner’s joke. It’s an odd one, but quite playful. 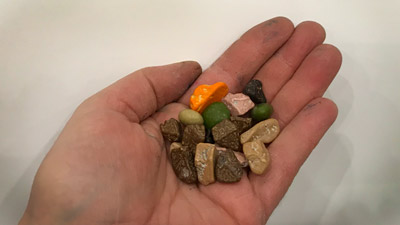 It reminds me of the words of Jesus, “Or which one of you, if his son asks him for bread, will give him a stone?” (Matt. 7:9) A rock that roughly looks like a round loaf would be a cruel joke for a hungry child. What kind of a father would do that?

I am the kind of father who would wrap pieces of mulch in Cowtail candy wrappers and put them in my son’s lunch bag. But then, it was April Fool’s Day.

God is the opposite gift giver: he gives all things good, though some come in forms we don’t recognize as such. Blessings shaped as hardships. Training wrapped in disciplines. There is never any hint of cruelty in his choices. No mocking laughter.

His stones, if we could get past the rebellion of our senses, are always sweet.

Jesus, your words have such power behind them. It was inconceivable to you that your Heavenly Father would ever deprive his children of what they need. Help us to take your truth to heart. Help us to believe that every gift you give us is good, regardless of the shape of it.

The Power of Love

Hold on a Sec!

Not Whether, but Which